There is something quite disconcerting, if not to say disturbing, about seeing a quote – for the record it’s the one that says ‘treading their own path, without giving a flying f*ck’ – you wrote in a review of Fudge’s single ‘Not A Threat, Just A Warning’ plastered on the walls of a venue. Yet at the same time, just between you and me you understand, I am somewhat proud of that quote for it sums up Fudge, at least for me. 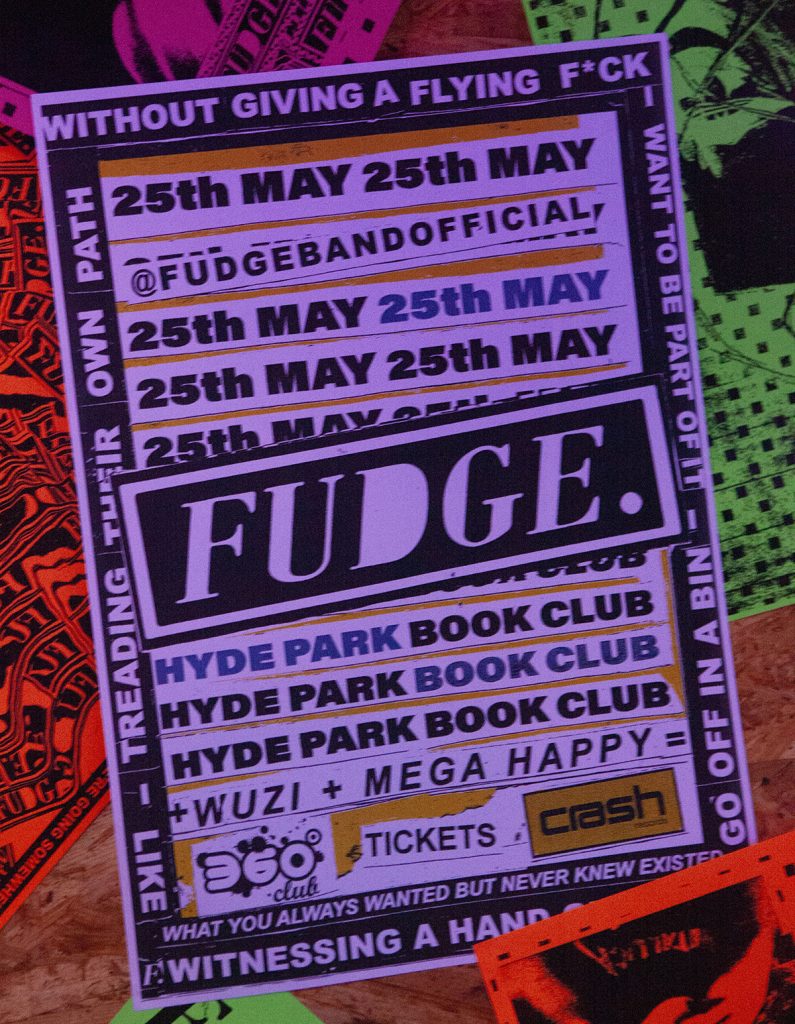 A Fudge gig always comes with a special atmosphere – there’s a buzz, an anticipation, a sense of community that even I, a reviewer who has to stand back and observe at least a bit (and that is really really hard to do), felt that night.

But before Fudge, just to whet our appetites and get our music muscles warmed up, there are two great bands – Mega Happy and Wuzi.

I’ve reviewed Mega Happy’s releases in the past, and as I’ve said, probably in way that you’re bored of, Mega Happy make me mega happy. My first live experience of the band left me super mega happy.

It’s a slightly rockier experience than I expected from the singles I’ve reviewed – and maybe I should have expected that – but the slightly warped sound I’ve grown to love was there. Also there was the words of the songs, which are so so important, just as strange, funny and brilliant as the singles. Some of Mega Happy’s lyrics are grin inducing, I got that grin that night.

I am introduced to songs I didn’t know, and I’m not disappointed. The included a song about losing your virginity which came (Careful! – Ed) with loads of wit and innuendo. The first song I recognise is ‘We Can’t be Friends’ and this is harder sounding than the single but somehow much more effective. This is followed by ‘Stubborn’. A song of which the opening line – ‘a brand new day makes me think of suicide’ – still feels disturbing buts it a fantastic song. It’s still wonderfully warped, perhaps even more so than the recorded version. That warp and the oh-so jangly sound just makes you want to bop around like a crazy thing.

The set ends with ‘I Want Your Boyfriend’, a track which I adore, but it’s strange, it’s strange in that it’s about a guy who wants the boyfriend of this girl. But it’s a joy, a slightly disconcerting joy. And the line ‘Boys are a much better shag’ still has me grinning like… well you you know.

Live, I am struck by how good the band are – the bass grabs you, the drums are cool and the guitar just stabs out these wonderful sounds.

Mega Happy are the sort of band that leave you with their songs lodged firmly in your head, a huge grin and feet that just can’t stop moving.

An age ago I reviewed an EP from Wuzi – ‘Bozo Material’ – and I’d been really really impressed by that so I was keen to see the band play live. I wasn’t disappointed.

The band start and it is the most gloriously noisy wall of sound, sound that throbs, it swirls, it fucking rips any sense from your brain, so immersive is what they do. You get the picture? It’s hypnotic and mesmerising.

And then, just to show us they can do other things, the next track is gentle and beguiling, and almost plaintive, it’s beautiful. But it builds, it builds into a roaring squall of sound. Yummy.

As the set goes on I get that somewhere, somewhere deep in there these songs have tunes, it isn’t just glorious noise, you may have to listen hard at times but it’s there.

And then, towards the end of their set, I am surprised for Wuzi play something that is, how should I put this, pretty and gentle. Almost too pretty, and yes it builds to a huge guitar break in say the tradition of those big AOR ballad things, but it’s lovely, swooningly lovely.

Standing back a little I hear hints of Nirvana, lashings of wall of sound acid rock, psychedelic rock, alternative rock, pretty psychedelic jangly pop, and countless other things. It is an intoxicating mix that is somehow more than these added together.

The impression I left with – as I try to get my breath back – is not the huge roaring swirling sound, although that’s a fabulous thing, is the subtlety in what they do. The layers of carefully placed sound. There is method in that wall of sound, it is an amazing and astounding thing. See this band, see this band at all costs.

It is impossible to write notes when Fudge play, it’s too messy, people – including Cam, who has a tendency to hurl himself off the stage and into the crowd – are all over the place. And for this gig I decided I had to be as close to the band as possible just to experience that Fudge thing. Too close it turned out for at times the fact that I had to stand still to take pictures proofed somewhat slightly risky as people reeled around in front of the stage.

It is tempting to just let my pictures do the talking but that would be lazy. But the problem is that I’m not sure I can adequately describe what it felt like, what it was like. Look I’ll try, not sure I can do this, but I’ll try.

From the moment Fudge started it all fucking kicked off. It was a riot, not call the police riotous (unlike the band’s previous ‘secret gig’), but a barely controlled seeming messy thing. People danced (or should that be moshed? Not sure. You get what I mean anyway don’t you?). They screamed out the words. They had shouted conversations with Cam. The heat in the basement of Hyde Park Book Club rose to an almost unbearable level, people took off a lot of clothes. There was however a feeling of community. People, although throwing themselves all over the place, were strangely careful – and caring I noticed as one of the wildly dancing crowd members escorted someone out of that mass of people to a safe place.

There was a sense of a shared experience, one that is really hard not to be part of. Fudge and their fans seem to be one thing. It’s a family. If this family has a leader it’s Cam, he appeared to have an almost magical way of calming people down, of getting people to come closer, I guess you’d call it charisma. The getting people to come closer was usually followed by Cam hurling himself into the crowd by the way.

But being closer to the band than I was the first time I saw them enabled me to really get that this is a band who love what they do. There is grinning, there even seem to be shared jokes, there is what I can only describe as joy in doing what they do. They don’t do ‘well another gig, plug in, play and then go’, I got the impression that playing live really means something to them, and they work hard, there’s no casual indifference.

There are other things that have lodged themselves into my head – Cam handing over the mic to the crowd, the moment Cam announced that he was bored and left the stage leaving vocals to somebody (sorry I have not the slightest idea who he was, I think he was the person that came on before their encore to ‘rev the crowd up’ at the first gig I went to), the guest vocalist who joined Cam for one track, Cam sitting on the shoulders of somebody in the crowd, the way a person who climbed on stage was encouraged to stage dive. Oh and those monologue things that Cam does before songs sometimes.

But more than this there is also the music, the glorious music. The fact that Angus’s drumming is absolutely the key to what they do, that without Josh’s bass it just wouldn’t work and that Otto’s guitar playing is just, well, wonderful. It’s not in any way just crowd provoking noise, there are subtle things going on their music which almost had me surprised.

I gush, but I’m entitled to gush. I might be a reviewer but I’m also a fan, and I grow into more of a fan each time I see them. Look a Fudge gig is something you need to experience, something you have to experience. Fudge do something I haven’t seen or heard for a long time, they make the crowd be part of the gig, they make it into a shared fucking wonderful thing.