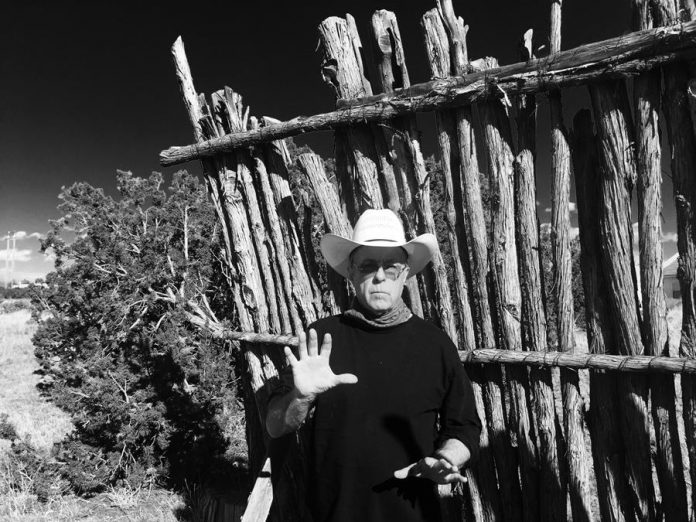 A signature Tom Russell collection, the wide-ranging subject matter on “Folk Hotel” includes songs and stories about New York’s Chelsea Hotel, a journey up the road from El Paso to Santa Fe, a cowboy song about Ian Tyson refusing to “leave his old horses”, a song for Dylan Thomas – melting into a James Joycean landscape about day in the life of Belfast, a song about Tom meeting J.F.K., another song using only 16th century slang and more…

Described as “the renaissance man of Americana: novelist, criminologist, artist, and singer-songwriter ” by The Guardian, Tom Russell’s long and influential career has many highlights, including Mojo Magazine’s Folk Album of the Year 2015, ‘The Rose of Roscrae’, his third in a series of acclaimed folk operas, following The Man From God Knows Where (1999) and Hotwalker (2005), live album Aztec Jazz (2013), recorded in Norway with world-renowned 32 piece Norwegian Wind Ensemble, Mesabi (2011) and Blood and Candle Smoke (2009). In the 1990s, Russell and Dave Alvin were hailed as the architects of what came to be known as “Americana” music after their Merle Haggard tribute, Tulare Dust, initiated the Americana charts in the U.S. and remained number one for a year.

Russell’s songs have been recorded by Johnny Cash, Doug Sahm, Nanci Griffith, Lawrence Ferlinghetti, Dave Alvin, Joe Ely, and many others. Alongside his 35 acclaimed albums, Russell has also composed movie scores, including songs for the Monte Hellman movie The Road To Nowhere and published five books, most recently 120 Songs of Tom Russell and a new book of essays “Ceremonies of the Horsemen”. An accomplished fine artist, Russell’s paintings are featured in: Blue Horse/Red Desert: The Art of Tom Russell.

1. Up In The Old Hotel
2. Leaving El Paso
3. I’ll Never Leave These Old Horses
4. The Sparrow of Swansea (For Dylan Thomas)
5. All On A Belfast Morning
6. Rise Again, Handsome Johnny
7. Harlan Clancy
8. The Last Time I Saw Hank
9. The Light Beyond The Coyote Fence
10. The Dram House Down In Gutter Lane
11. The Day They Dredged The Liffey – The Banks Of Montauk – The Road To Santa Fe-O
12. The Rooftops Of Copenhagen

Tom will tour the UK and Ireland in November and December with dates as follows: