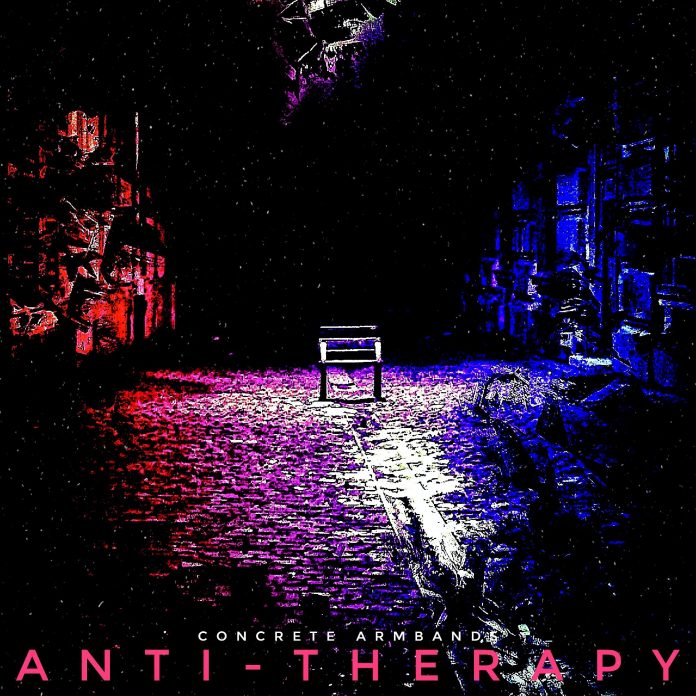 I reviewed Concrete Armband’s previous two singles – ‘The Brink’ and ‘… Like Russian Dolls’ – and was hugely impressed, although somewhat surprised by the difference in their sound. These singles are on this EP by the way. However those in no way shape or form prepared me for this EP, it left me reeling. What Concrete Armband are doing I have frankly not one idea, I love it make no mistake but it’s the strangest thing.

So to get us all up and on the same page ‘The Brink’ was a piece of heavy alternative rock, while ‘… Like Russian Dolls’ hits with, at least for the majority of the track, something like an 80s’ synth track. I thought I had this band down, I thought I knew what to expect. How wrong I was.

So ‘Satellites’ opens with piano, and that leads us into something that sounds like one of those theatrical 70s’ ballads. It is the strangest thing. It even sounds a bit like Queen at points. While throwing in Pink Floyd, Sparks, Yes and all manner of things. There is not one alternative rock guitar in there. It’s huge, layered and lush. We are obviously on some kind of journey.

So next up is ‘… Like Russian Dolls’. I’m on safer ground here. I reviewed this. I said ‘The opening is all 80s’ electronic rock, it has that synth drum thing going on. And it has vocals to die for, the lead vocal is a thing of joy. And then, at nearly 3 minutes in, it just goes completely crazy. It gets loud, way loud, it thunders, it roars’. It left me speechless when I reviewed it before, it still does that.

And then I am completely confused, the next track ‘Bud’ is something almost country, Americana. It reminds me of Aztec Camera in a rather weird way. What are Concrete Armbands doing? I have not the slightest idea. But I adore this track. It’s rather moving and sweet. It’s jaunty, not a word I think I’ve ever used in a r before but it is.

‘The Brink’ is up next, I’ve reviewed that before so here goes ‘The band’s brand of alternative rock is heavy, I mean way heavy, this thing majors on bass. I mean yep, so the band say Muse are an influence and you can hear that but there’s more than hints of post-hardcore here. This is musically by the way, there’s none of that hardcore vocal thing’. Got it. But what I hear, having heard ‘Satellites’ is a certain theatrical thing going on there, there’s a continuity of sound. This is fantastic thing people.

The EP closer is a many sectioned track, here goes ‘God Complex (I. Serenity Station, II. The Universal It, III. And the Music Gets Louder, IV. Ego Death)’. This alone should clue you into the fact that this isn’t the average song. It opens with acoustic guitar over washes of synth and the odd weird sound. Before morphing into something of softly rocking thing with the loveliest high pitched vocals. And then indeed ‘And The Music Gets Louder’, it goes post-hardcore, it goes shake the windows loud. Before dropping into something that mixes that almost prog sound with something almost country. It sounds as though it shouldn’t work but it does. It’s so good it leaves me without words to describe quite how good this is.

I love this EP but I just didn’t ‘get’ what the band are doing until a friend rather helpfully reminded me that there were bands in the 70s that used to release albums that mixed heavy rock, folk tracks, sweet ballads and more. All you needed to know was the band had a sound that travelled over those styles. Like Queen, like Yes, like Led Zepplin. This is something I should have got, I do actually have lots of that in my collection.

Concrete Armbands very definitely have a sound, across these track although they vary, that sound shines through. What else shines through is that this is a band who know how to play, musically it’s highly impressive.

Look if you’re one of those people who like a band to ‘sound’ generally the same, play the same kind of stuff, then this probably isn’t for you. However if you are someone who just likes great music played really well, and don’t care one jot what style of music it is, then this is very definitely for you.

This is brilliant, it’s fantastic, it’s a band just doing what they want to do, and doing it incredibly well.