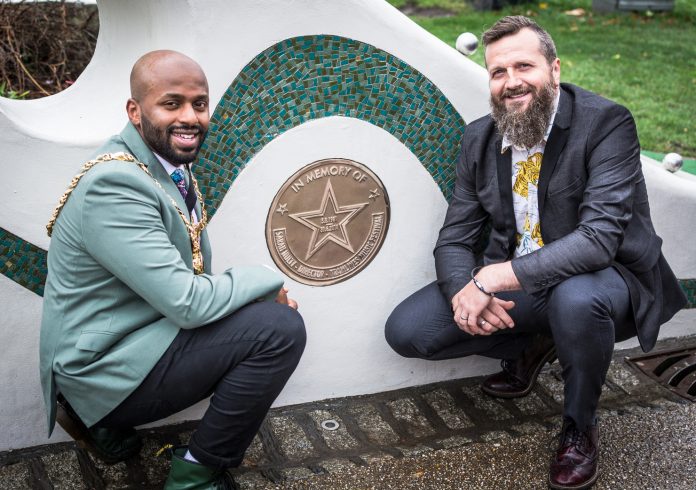 A memorial plaque for the late Tramlines Festival Director, Sarah Nulty, was unveiled yesterday by The Lord Mayor of Sheffield Magid Magid, and Tramlines Operations Director Timm Cleasby at Devonshire Green – the original site of the Tramlines’ Main Stage in 2009. A Civic Award for Sarah from the Lord Mayor was also presented to Sarah’s mother Julie Voisey and former partner Christie Rossiter.

The ceremony included tributes from the Leader of Sheffield City Council Julie Dore, and Richard Eyre, Head of City Centre and Major Events at Sheffield City Council. Both the memorial and the Civic Award have been given in recognition of Sarah’s positive impact on Sheffield’s music scene and for her achievements in the wider music industry. Sarah sadly passed away at the age of 36 several weeks before the 10th edition of Tramlines.

Sarah was instrumental in the launch of Tramlines in 2009 and by 2013, took on the role as Festival Director. She came to Sheffield as a student in 1999 and worked at Gatecrasher and Bed nightclub before going on to manage various venues and live music events around the city.

Sarah dedicated her whole working career to the Sheffield music industry. After nearly two-decades, this work has led to massive benefits for the city and she was the driving force of Tramlines for many years. Her tenacity, vision and unbreakable work ethic are the reasons that the festival celebrated its tenth anniversary in July this year.

Tramlines Operations Director, Timm Cleasby said: “Sarah was a great friend and colleague and this is a fantastic tribute to her. This plaque is perfectly situated at the original site of the main stage at Devonshire Green and will evoke many great memories of Sarah when we visit it. We hope that it serves as both a lasting reminder of the incredible work Sarah has done over the years for Tramlines and the wider music scene in Sheffield, but also as an inspiration for young women who might get involved in music too.”

Julie Dore, Leader of Sheffield City Council commented: “My personal view is that Sarah was a formidable and phenomenal woman, she knew what she wanted and she went out and got it. What she achieved and delivered on behalf of Sheffield city is her legacy for many years to come.”

Lord Mayor of Sheffield Magid Magid added: “Sheffield’s always had a rich history of culture and the arts, but it takes people to make this happen. Sarah epitomised everything that is great and good about Sheffield. Her contribution lives within her family and friends and within the festival. Her legacy will live on forever and we as a city will always be in debt to her. Putting up this plaque and bestowing her with a civic award is the least we can do.”

Sarah’s mother Julie Voisey said: “Sarah’s family would like to thank everyone for their kindness and support over the past few months and for all the heartfelt tributes we’ve received. At age 18, Sarah chose Sheffield to be her new home and grew to love the city. Sarah was humble about her achievements and would be honoured to receive this recognition of her hard work and contribution to Sheffield’s music scene. We are so proud of what she achieved in the short time she was here. She was, and will always be, our Super Star.”