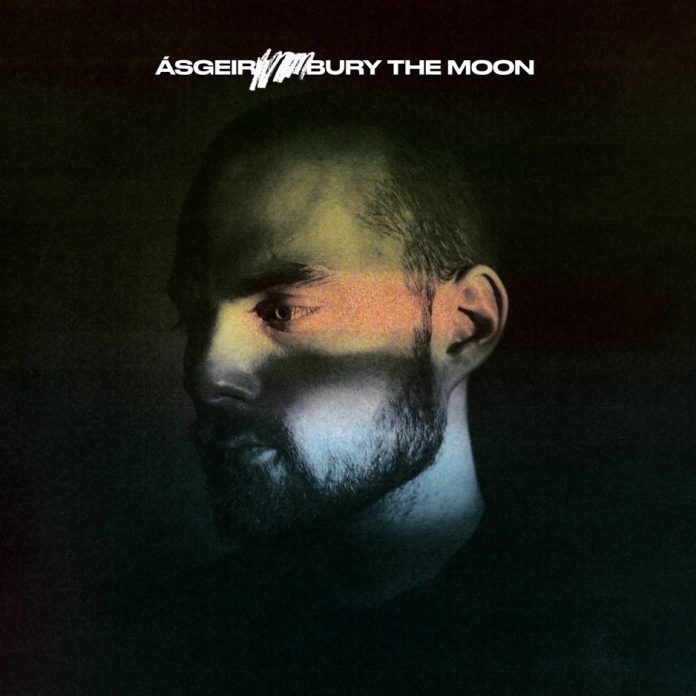 Ásgeir makes music that penetrates a little deeper than most. A potent Icelandic songwriter, his debut album soared to success in his native land, before English language edition ‘In The Silence’ connected with an entirely new audience. An artist of rare scope, sincerity, and emotion, his next step might well be his bravest, and his most enduring. ‘Bury The Moon’ – or ‘Sátt’, to give the record its Icelandic title – is out on 7th February on One Little Indian Records.

‘Bury The Moon’ begins with heartbreak and escape. Ásgeir watched a long-term relationship disintegrate, and decided he needed to get away, to lose himself in the endless Icelandic countryside. Booking space at a summerhouse – a tiny rural home used by those on the island – he spent the winter writing, just him, his guitar, and those endless reflections on love and loss.

“I took my guitar, a small keyboard, and a very simple recording set up,” he recalls. “And that was it.”

Days, weeks went past, with close friends dropping by to hand over food parcels, and words of encouragement. “I’ve always had this longing to go somewhere on my own,” he says. “I think it was really good to go there and just think about music and have no distractions whatsoever. I went out running in the morning and then I wrote all day”.

The songs tumbled forth. Acoustic meditations intermingled with keyboard reflections, before Ásgeir was finally ready to return. “I went with just the guitar and piano for a reason,” he comments. “I wanted to make a simple album that didn’t process too much or think too much. It would just be what the songs were and nothing more than that.”

Unfurling his new ideas in the studio, he started to gather like-minds, fellow travellers, and guest lyricists to work on his music. Indeed, that’s the way he’s always worked – Ásgeir sculpts the melodies, the arrangements, while the words form this counterbalance, penned by other figures.

Take the first song he completed for the album. ‘Living Water’ is this gorgeous paean to Iceland’s astonishing natural resources, and the urgent need to protect them. It actually began life as a poem – penned by Ásgeir’s father, Einar Georg Einarsson.

“I’ve always been fascinated with how my father writes,” he explains, “and I probably started using his lyrics when I was about 12 or 13. With ‘Living Water’ I was singing it in my head as I was reading the poetry book, and this lyric popped out because it just fitted.”

Einar Georg Einarsson wrote many of the lyrics for Ásgeir’s extraordinary debut, and this partnership has only strengthened and deepened their father-son relationship. “I think the lyrical side of the album is, at times, a bit more personal for me now, because my Dad and I did it together. We spent a lot of time together”.

At times, ‘Bury The Moon’ is a bruising, achingly personal experience, with shades of the endless isolation Ásgeir put himself through in that remote summerhouse. ‘Rattled Snow’ shivers with the Icelandic cold, while ‘Lazy Giants’ peers into the lingering spectre of economic collapse. ‘Youth’, meanwhile, is about childhood, one of the lyrics Ásgeir and his father worked on together.

Musically, though, the record is a direct but continually surprising experience, moving from starkly beautiful folk passages through to clinical electronics. It’s a record that connects the innately personal to the outside world, by linking his instantly recognisable acoustic force to some refreshing, addictive new ideas.

“Sometimes I like just not having a clue,” he smiles, “so I begin with one instrument and see where it takes me. I don’t want to put myself in a box before going into the studio, but some of the songs just yelled out what they needed around them.”

That was the mantra Ásgeir used throughout those sessions: “Give the song what it needs, and not overdo it.”

Indeed, the title track is a microcosm of the way the album progressed. Initially an acoustic sketch, it becomes a bubbling, ruptured digital piece, one of the most daring songs Ásgeir has yet completed. “It’s an abstract lyric,” he says, “about a guy trying to save a relationship. But it doesn’t work.”

Pairing this with barbed electronics, he retained the initial Logic drum part he wrote in his bedroom. “Just don’t think too much about it,” he insists. “Let it be raw. Don’t get too lost in how it should sound. Don’t try to chase a perfect sound.”

In accepting his own imperfections, Ásgeir may well have produced his most remarkable work yet. American songwriter and Reykjavik resident John Grant assisted on translating the lyrics to English, but the voice could only belong to one person. It’s the same voice that drove debut album ‘In The Silence’ to such astonishing heights. Not that this success phases Ásgeir – his concentration is solely on the craft, on the art, and on his fans.

“I’m looking forward to seeing the reactions, and how it sits with people,” he says. “I wanted to take the project back to its roots, in a way, and make it more about honesty: honest songs with strong melodies and lyrics.”