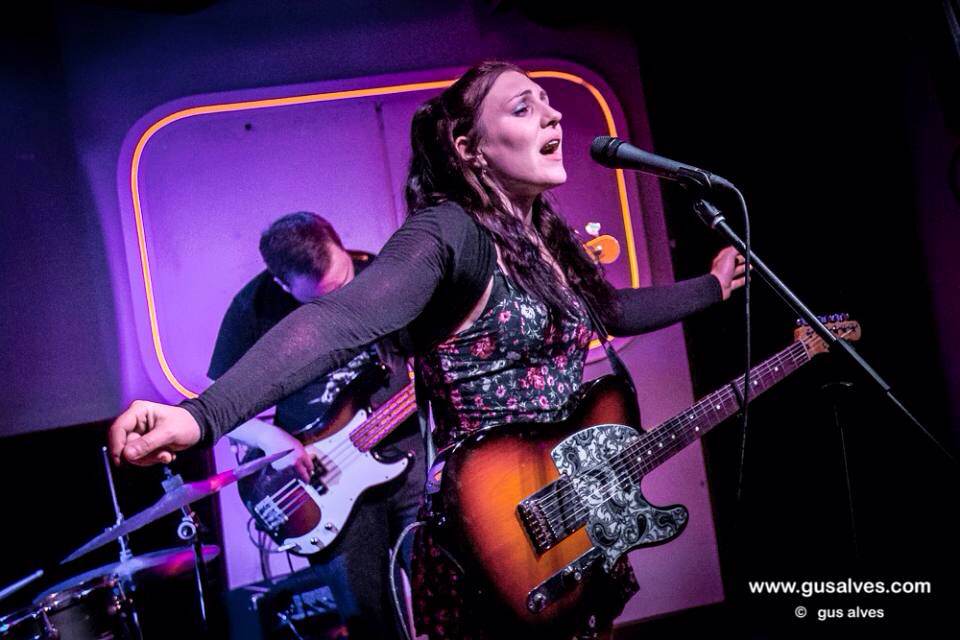 Blues has always provided an outlet for women who push the boundaries of gender and sexuality, says award-winning musician, Dani Wilde, who will be headlining at the The Sisters of Blues and Soul Festival, which comes to Todmorden in July 2016.

Recently announced winner of the Best Female Vocalist of the British Blues Awards 2015, Dani welcomes this opportunity to celebrate the talents and courageousness and of Blues Women – especially in a town like Tod where women’s freedom of self-expression is high on the agenda.

‘The talent that comes from blues women is just extraordinary,’ Dani explains ‘Think about some of the big names like Bonnie Raitt… In other genres especially pop it’s a shame the way women are presented – too much auto tune and so much emphasis on the importance of looking good. Naturally as Blues Women we take pride in how we look, but our medium is about passion, emotion and sharing that to make the audience feel involved. In blues it’s a live genre and you have to be able to hold your own.’

Blues, Dani says, is all about changing perceptions and about breaking down political and social barriers. ‘When you look at some of the biggest Blues women back in the 1920s, most of the big names were bisexual women who had relations with women as well as men. Who weren’t afraid to challenge the stereotypes of how a woman ”should be”. For Black women living in the South of America this was a very significant statement,’ she says. ‘They were role models.’

As a university lecturer at Britain and Ireland’s Modern Music Institute and as a columnist for Classic Rock’s Blues Magazine, Dani she is keen to promote understanding of the influence of women in her genre.

‘Take women like Bessie Smith, Big Mama Thornton, Lucille Bogan, and Ethel Waters – who sang ‘Stormy Monday’ – and was born at the end of 1800s – they were proud to be bisexual. Take Ma Rainey – she was known as the mother of the blues – she wasn’t openly ”out”, but sang about wearing a collar and a tie.’

Dani also points to women like Big Momma Thornton – who wrote ‘Ball and Chain’ that Janice Joplin had a big hit with – who was described as ‘a bear of a woman’ and wore men’s clothes on stage. ‘She had great influence… Joplin watched her perform and was really inspired her, and covered her song and it became a massive hit. It was great that her music had such crossover success, but a shame for Big Momma Thornton and the white people made a lot more money from her hits,’ Dani says.

Lucille Bogan was an early 20th century Blues singer who was quite notorious for the lyrics she sang on stage, about sex, alcohol and sexuality. ‘She’d do a clean version on vinyl but at 3am in the morning she’d sing a really outrageously filthy version in a honky tonk venue,’ Dani says. Lucille’s famous song ‘BD Woman’s Blues’ sees the world through the eyes of a ”bull dyke”, with lines such as “Comin’ a time, B.D. women, they ain’t gonna need no men”and” They can lay their jive just like a natural man.”

In her own experiences Dani has found that even in the contemporary world, Blues is something of a refuge for non- conformist people. She says: ‘I see it on tour in Moscow – which is not the kind of place you are going to feel safe coming out – but in Blues clubs people are free to express themselves. There’s something about these creative environments, they offer some kind of sanctuary.’

Although Dani can’t promise us any particularly shocking lyrics when she performs at The Sisters of Blues and Soul Festival, she is strongly committed to sharing the issues that matter to her.

Every year Dani travels to Embu – near Mount Kenya – which she first visited while involved in her university project about fundraising to bring music to the lives of slum-dwelling children. Now a decade on, Dani is still fundraising for children there, especially for girls, to get a music education. ‘Education only became compulsory for girls quite recently. Kenya is really coming on – it’s a shame about the terrorist attacks – because things are developing – you can see how much opportunity there is,’ she says.

Dani’s visits inspired her song ‘Abandoned Child’ – which she wrote about a little girl whose mother left her and her sister with their alcoholic father. ‘The family are part of a tribe which still promotes female genital mutilation. Any money the local charity gave the father was spent on drink,’ Dani says, describing how this little girl caught her attention in one of the slum schools, because she appeared so neglected. ‘She looked ill and so much in need of love and attention. Fortunately one of the charities I work with – called Moving Mountains – were able to help rescue her and her sisters, by getting the grandparents involved to give a lot more support, and make sure the girls got fed. The good thing about it is through my music I can tell other people about it, and how they can help other children in similar situations.’

It’s a surprise to realise that Dani has only just turned 30, because she comes across as such a mature soul. But she’s someone who has always had a strong sense of where she wants to go in life and how to get it.

Growing up in a soul and blues-loving family Dani was inspired by seeing some of the greats like BB King, Susan Tedeschi, Shemekia Copeland and Sue Foley (who she later toured with – something that Dani describes as ‘a dream come true – intimidating but wonderful!) and began singing and playing drums at the age of 10.
She went on to gain a First Class Degree in Vocals from the Brighton Institute of Modern Music.

‘During my degree, around the time I was 20, I was gigging a lot. I looked at all the venues where my heroes were playing, and I approached them and asked if I could do a support slot,’ Dani says. ‘Doing that I made a lot of contacts – one of them was Chris Holland, Jools Holland’s younger brother, who I met at a club. He was impressed by what I was doing. And so my first really big gig was at the Royal Albert Hall – opening for Jools Holland – which was really lovely. It made record labels and magazines take notice of me. I was so lucky to start at the top.’

However Dani has clearly created a great deal of her own ‘luck’ and has continued to work hard as her career develops. ‘People talk about James Brown being the hardest working man in showbiz and they say that BB King toured every night and had no home, but I think during The year of the Girls with Guitars Blues Caravan tour, I was one of the hardest working women in show business,’ Dani says with a self-effacing laugh. During this tour, which started in 2011 – she was collaborating with American artists Samantha Fish and Cassie Taylor. In the gaps between gigs, she was going out touring with her own band. ‘I must have done over 250 gigs,’ she says.

Dani is known as much for her guitar playing as her singing, but admits to being self taught and initially seeing it more as a songwriting tool. ‘When I was signed to Ruf Recrords, the record label launched my career as a lead guitar player, and they were strongly pushing me in that direction. So I had to really improve. I toured with Deborah Coleman – who had shared stages with BB King in her heyday, 30 years ago. Touring with Deborah I picked up so much. But I’m not sure how I got away with it to start with!’ Dani says – with a modesty that is as genuine as it is charming. ‘Now, thanks to the experience of performing with those other amazing women, when I’m on stage playing guitar I’m not thinking about the playing, just expressing myself and having a great time. I can focus on the emotion and communication with the audience.’

For her own ‘band’ Dani uses a number of session musicians who she enjoys working with. ‘I tend to have two drummers and three bassists – not all at the same time, obviously! I have a female bassist called Victoria Smith who is an amazing. She’s a world class bass player but she also plays a lot of punk music as well, so she’s an all-round session player. And at the moment I have the brilliant drummer, Jack Bazzani, and there’s a younger guy, Fergus Gerrand who plays drums for me – who has toured with Sting and Madonna. I’m very fortunate to work with some pretty pro players.’

Asked to describe her style, Dani says that predominantly she’s a Blues artist but she’s inspired by many different kinds of music. ‘I don’t really think about genre – I just play and see what comes out,’ she says. ‘I had a top 40 charting songs in the Blues charts – although I thought the song sounded more gospel. But sometimes I play and see what comes out of the box.’

Dani says that her last album, ‘Songs about You’, was definitely Bluesy – and also inspired by Bill Withers, Lyle Lovett and other Country influence, and some popular singer/songwriters like Carol King and Joni Mitchell. It’s certainly proved popular and is undoubtedly one of the reasons she won the Female Vocalist category at the 2015 British Blues Award.

‘It’s an album that is very much about the song writing,’ Dani explains. ‘In Blues you don’t tend to have a verse, but more a hook or a turnaround. In blues it’s all verses, the title for the song will tend to be the hook but usually there’s no big chorus. Blues is more simple in structure. But I like to complicate things, and bring in more popular song writing techniques in terms of structure.’

Dani is hugely welcoming of the opportunity to be on stage at the The Sisters of Blues and Soul Festival, next year. Too often women in Blues are highly influential but don’t get the credit they deserve, she explains, citing the example of Big Mama Thornton who significantly inspired Elvis Presley, and was the person for whom ‘Hound dog’ was first written – as well as influencing Janis Joplin – but is still unknown to so many people.

‘This Festival is a fantastic opportunity. It’s really important but very unusual to get blues women together on the bill and to make us the majority not the minority,’ Dani says.