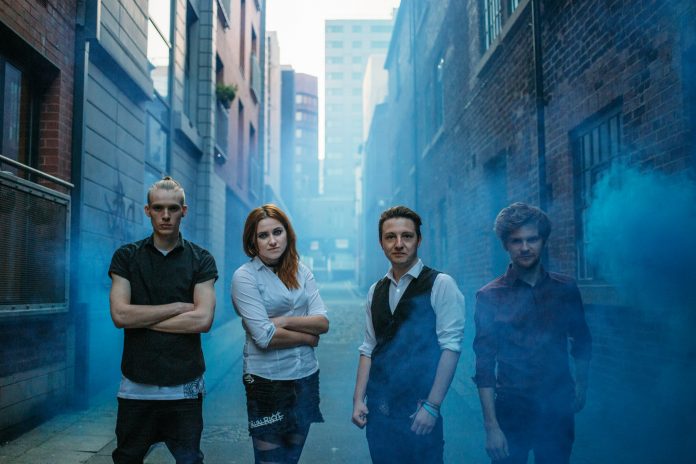 How did you all form the band?
It was a bit of a botch job. We were looking for a drummer, as per and Joel left us a message on Facebook then we all just seemed to gel really quickly and stuff started kicking off. We’ve all been in to music for a long time though, Joel was the baby that hit things with sticks and Alex was that kid on a violin.

Have you had a lot of support from your local music scene?
There are definitely a lot of bands that group together and they can be pretty supportive. At first you’re trying to find where you sit. At first we gigged with either Indie bands or Metal bands but in the last year or so we’ve come across a lot of Pop Punk bands and it’s been really cool finding people with the same common ground.

What made you decide to go down the Pop Punk route?
In terms of influences our biggest ones would be bands like: Fall Out Boy, You Me At Six, Green Day. Them kind of bands, we belong in 2004 really. There’s definitely a new style of Pop Punk coming out but when writing we like to keep it simple and kind of old school; that way its poppy and catchy and easy to sing along to.

It’s what we grew up with in our teenage years so we all have them routes. But when we first started Adam was adamant that we weren’t a pop punk band, he didn’t want to pigeon hole us. It just happened though, there wasn’t any questioning that we were Pop Punk.

As a band do you prefer playing live or recording?
Live’s always the more fun stuff because you get out there and get to just act like an idiot for a bit. With playing live you get instant gratification because you feel the reaction from the crowd straight away, the difference with studio is the constant anticipation you feel. When recording you just want to get it out there and show people but it’s a long process to go through. Generally, though, when you’re doing one thing you start to miss the other.

What’s been your best gig experience so far?
We played with Patent Pending at Corporation in Sheffield and that has been a band we’ve grown up with so it was an absolute honour to play for them. Again in Corp we played a sold out headline show which was pretty crazy, really sweaty but pretty cool.

What’s next for Sweet Little Machine?
We just won a competition which means we’ll be supporting Less Than Jake at the O2 Academy Sheffield. Then we always do a Christmas show and this year we’re doing London and Sheffield so it gives us a chance to head down South. We’ll be back in the recording studio pretty soon as well so a full schedule really.

The latest single: ‘In God We Trust’

Sweet Little Machine take us back to the days of lively party anthems and roaring instrumentals with no hesitation. The bands nonchalant appearance in the music video reflects the composure of their music, a couple of guitars and a drum set thrown together to create something that actually works. With the ever expanding rise in music genres and sub-genres and experimental sounds it was seeming that the days of bellowing catchy Pop Punk lyrics at the top of our voices was over. Sweet Little Machine have emphatically leaped aboard our regression sessions and are bringing back the easy to sing to, easy to dance to beats.

Each member of the band is wholly involved in their instrument and play with a passion for their choice of genre. The mix of instruments and individual personalities can sometimes clash but the band show how they gel as a whole and are able to complement each other’s sound. All together their latest single oozes passion and energy and overwhelmingly encourages the audience to get involved. The beauty of putting such energy into the recorded single is that their music can be enjoyed both live and in private in the same way, which signifies what old school Pop Punk is all about.