White Rabbit nights are associated with a sense of wonder, intrigue and energy, and they are attracting massive interest from all over the UK and even further afield. According to Richard, however, they are: “professional amateurs. Amateurs! Totally blagging it. Winging it! It’s like when Forrest Gump is running and everyone’s joining him.”

Their first home was Hebden Bridge Trades Club and they recently started putting additional nights on at Todmorden’s Crazy8, upstairs in the Golden Lion.

L: So, how did it all come about?
RW: There was never a second wave of psych. Psych in the ‘60s only lasted two and a half years – a very short period of time. And then it was over. It’s always been there in bands since that time. Tinges of it started appearing in shoegaze stuff, but there was never a comeback until the last five years. Jim Hebbes (the other half of White Rabbit) and I were at Green Man Festival – we looked at each other and said, “It’s coming,” as we were sitting watching one psych act after another. We’d been waiting for that phase to arrive. We were packing our tents away at the end of the festival, and decided to start White Rabbit once we got back to Todmorden. And it took off overnight.

L: How does this new wave of psych differ from ‘60s psych?
RW: New psych is tinged with shoegaze and drone. ‘60s psych is poppy and has a ‘love’ theme. New psych is kraut rock, repetitive, droney. A lot of bands use an electronic dance beat. It’s more accessible, for example, my son is 17 and a half, he and all his mates are all over it like a rash. They dress in a very ‘60s style but they are listening to both ‘60s psych and the new stuff.

L: Tell us about The Light Show
RW: Liquid light shows are an integral part of the White Rabbit movement, as they were in the late ‘60s. I like the synergy and connection between bands, and the light show and music works synergistically too. I’ve always been interested in lighting, and I’ve found that they always go together. Light creates a warmer atmosphere. Bands respond to it and it seems to make their performance better, even if there is only a small crowd.

These are the most successful nights I’ve put on. This is not just a gig – we always try to have a theme for the night. Generally the night starts early with DJs, then we have bands with a light show and then finish with more DJs. It’s harking back to the parties I used to go to in Wales that were three to four days long.

L: Talking of these parties – tell us where it began for, you, Richard?
RW: It started in the 1980s when I used to live on a bus. People were struggling during Thatcher’s Britain and some started living on buses. We would take over a field with our buses. This was before mobile phones. Someone would stop to use a phone box to tell people the grid reference of the field, and 2000 people would turn up. This was the during the acid house scene. People started putting on parties and I used to go to these. Wango Riley would arrive from down South; the sides of his lorry would collapse to make stages. We’d have Hawkwind, RDF, Cultureshock, Poisoned Electrick Head playing and some of these would put on a light show. The lights got me further into the music and this stuck with me.

L: What’s the motivation behind White Rabbit?
RW: I’m a passionate, driven person. I do it because I enjoy seeing people come with a big smile on their faces, get to see bands, feel happy and excited, and then going away happy. I never know what my motivation is, but I know I am motivated.

Another drive is I enjoy helping people that are starting out. I like it when people help each other out. I like giving. I’ve never been a taker.

I’ve worked in the music industry, engineering in recording studios, but I’ve also worked in care-giving, empathetic roles as a qualified nurse, and for social services. These roles have given me the skills to deal with egos and get on with people who are known to be difficult to get along with….promoters, agents…

So we’re trying to use our skills to put a show together and put on bands we like, but also try to keep a connection or a theme for the night. We’re trying to do it in a positive way. It’s a very small community, and it’s fun; everyone knows each other.

Take the Bad Vibrations crew in London, they’re putting on the same bands as us. To get London bands to play up here is amazing – that they want to do it. Bands are blown away by the hospitality and the passion up here. Our motivation isn’t money or being in the spotlight.

L: So what’s next?
RW: Just like Forrest Gump stops running one day, that’ll happen with White Rabbit. We don’t know where it’s going. It’s best to let it run and one day it will stop and that’ll be it.

For now though, White Rabbit are going to go more electronic, a tip of the hat to the days of acid house scene, very psychedelic. The light show is also changing to a darker vibe.

L: Listening to Richard speaking I’m reminded of that famous lyric in Jefferson Airplane’s ‘White Rabbit’, the song that started this whole story:

So my advice would be – take yourself on an adventure to Wonderland with White Rabbit before it stops. There are several gigs coming up…

Coming up from White Rabbit

November 12th: Camera and Radar Men from the Moon at Crazy8 Golden Lion, Todmorden
”Camera are from Berlin,” Richards says. ”We put them on in the Three Wise Monkeys’ basement last year and they blew it clean away. It was the first time they had played in England and they say it was their best ever gig.”

November 21st: DJ Andrew Weatherall + Blanck Mass (Fuck Buttons) and Gum Takes Tooth
Richard says that this is the biggest gig for him on a personal level. ”Weatherall is a pioneer and is still pushing the boundaries. It is rare to see him play a psych set although everything he does is tinged with psych, and he wrote the foreword to Rob Chapman’s book. He also produced the 2nd Fuck Buttons’ album which is great as they’re supporting him at this gig.”

April 30th 2016: 65DAYSOFSTATIC The Trades, Hebden Bridge
‘This is the biggest act White Rabbit have put on to date.” 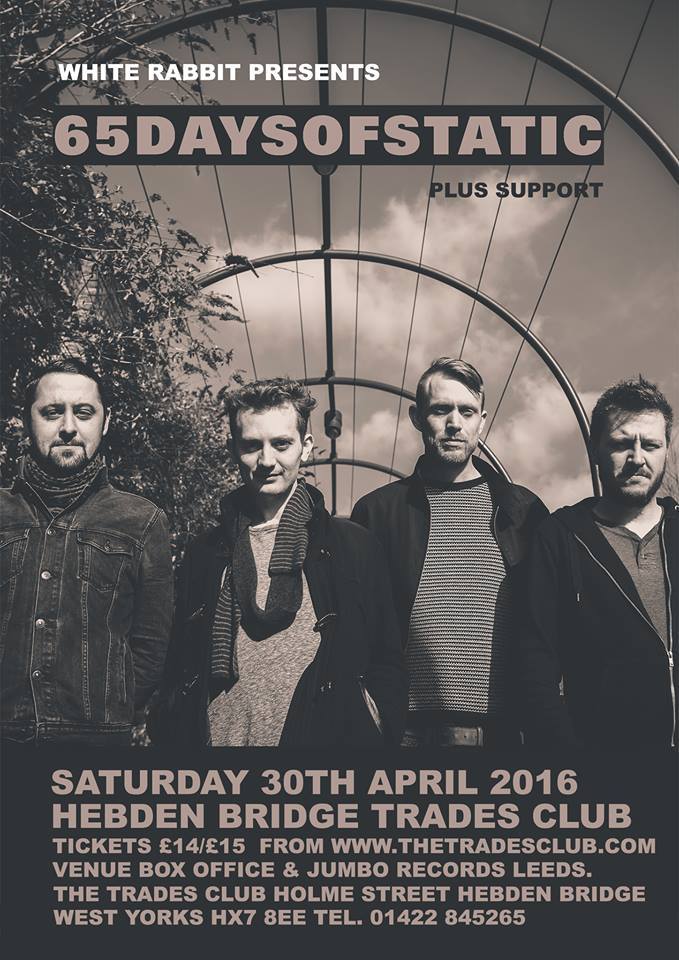