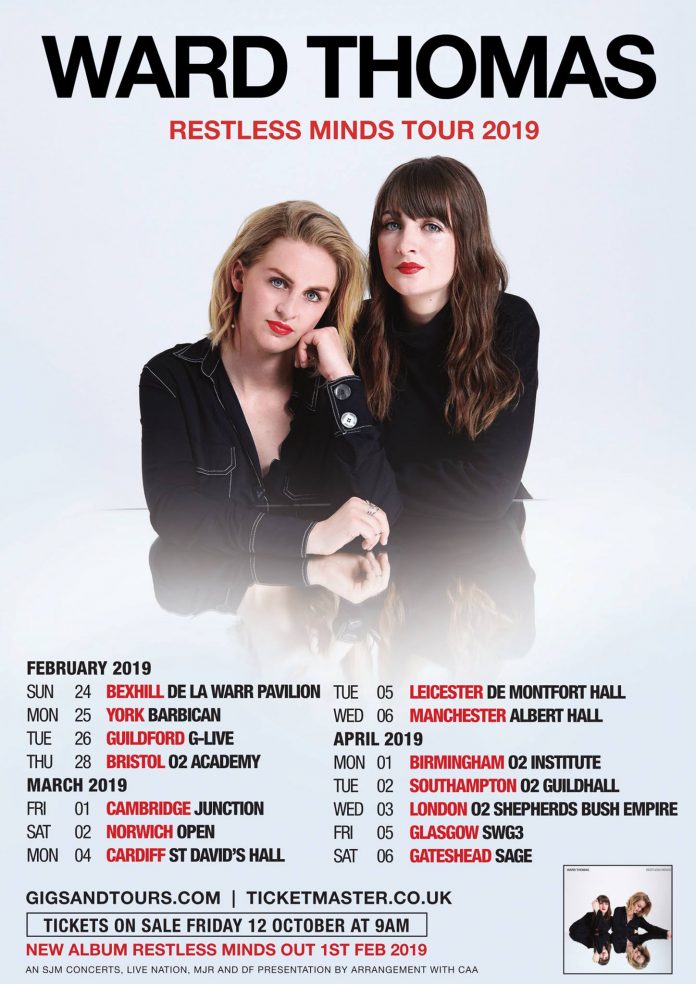 Written by Ward Thomas alongside Rebekah Powell and Jessica Sharman (who also co-wrote recent single ‘Lie Like Me’) and produced by Joe Rubel (Ed Sheeran, Tom Grennan), ‘Never Know’, is an empowering, arms-aloft pop anthem that they call their ‘ranty song’ and if you listen carefully, secretly features a reversed sample of a dog growl!

“Never Know” is a song we have always wanted to write” they said; “It’s for anyone who has been rejected in a friendship, relationship or in work. But out of that rejection comes empowerment and a sense of freedom and release which gives you the courage to do what you believe in and be yourself.”

Ward Thomas play the following UK dates with tickets on sale at 9am Friday 12th October with a special fan pre-sale starting at 9am on Wednesday 10th October. For more info visit www.wardthomasmusic.com.

Lyrically the twins have tackled issues close to their hearts on ‘Restless Minds’, including pertinent observations on social media, the women’s movement, what ‘the truth’ means in 2018 and mental health. “We couldn’t help but address social media and the subconscious competition it creates,” says Lizzy. “There’s a fake reality that everyone our age is falling for right now. Scroll down, see my page, look at my perfect life!”

Catherine and Lizzy will also feature in the forthcoming BBC Radio 1 documentary “Beyond Nashville”, presented by Scott Mills, exploring Country Music’s extraordinary success in the UK charts this year. The doc explores how the genre has changed and grown on both sides of the pond. Along the way Scott speaks to some of the biggest artists on today’s scene including Ward Thomas. “Beyond Nashville” and will be out on BBC Radio1’s iPlayer channel on 19th October and also on BBC red button.

Restless Minds is the follow up to their 2016 No.1 charting major label debut ‘Cartwheels’ and firmly establishes Ward Thomas as leading exponents of new wave country tinged pop. ‘Restless Minds’ is available to pre-order now.