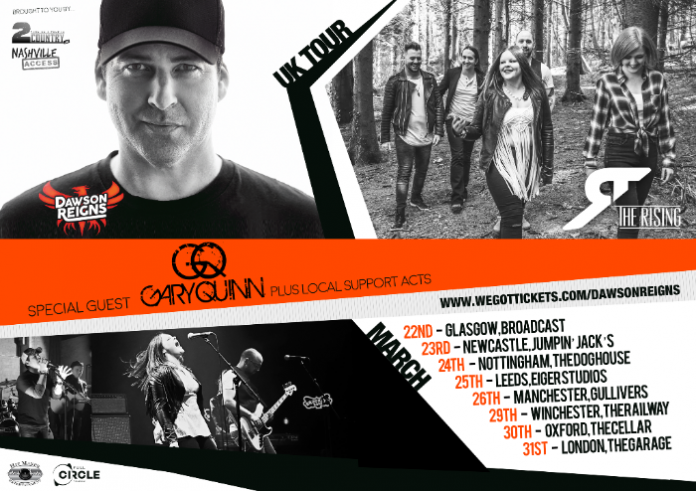 2016 saw the British country scene grow not just steadily but it exploded. With Country2Country, Buckles & Boots and FSA Fest all seeing their audiences swell, the chart impact of record breaking acts Ward Thomas and The Shires has really seen the country sound break into mainstream.

Championed by Bob Harries, Baylen Leonard and Chris Country, Nashville based singer/songwriter Dawson Reigns kickstarted his UK campaign last year with the rock-tinged infectious radio hit ‘Love Way All You’, which was co-penned by The Shires tour-mate Canaan Smith. With his eponymous EP receiving glowing reviews and his brief UK tour in September alongside Holloway Road winning him an army of British fans, Dawson can’t wait to return to the UK.

Belfast based quintet The Rising launched their revamped line-up in 2016 with the stunning ‘Last First Love’. Having been holed up in the studio for the majority of the year, the group can’t wait to share their new songs with audiences as they build towards their sophomore album. With famous fans including Graham Norton, Gaby Roslin and Alex Lester, the group have opened for Ward Thomas, The Shires and Jess & The Bandits.

Joining them on the road is 4 times British Country Music Award winner, including 2016’s Best Male Vocalist, Gary Quinn. 2016 saw Gary release his acclaimed EP, I Remember, which was headed up by the chart topping single Shame. Having worked with Phil Vassar on his Songs From The Cellar, and recently spent time in Nashville co-writing with Steve Wariner, Gary is excited to showcase his material old and new with his fans.

Throw in a special guest at each night of tour and you have a truly unforgettable experience that showcases the true diversity of country music.